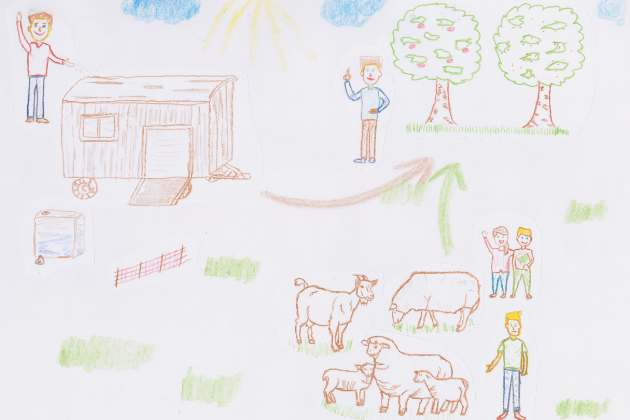 With this project I would like to revive the natural grazing of extensive grassland-orchards with sheep and goats, through which the diversity of typical meadow plants and animals is preserved. I then provide the necessary equipment free of charge.

With this project, I would like to purchase a mobile shelter, a water barrel with drinking trough, a mobile pasture fence including battery and tree protection against grazing damage and make this equipment available free of charge to owners of sheep and/or goats in the Weilheim/Teck to Neuffen area South of Stuttgart. In this area, which is characterized by extensive grassland-orchards, is the bird sanctuary “Vorland der mittleren Schwäbischen Alb” as well as a part of the UNESCO biosphere area Schwäbische Alb.

However, the maintenance of these very species-rich extensive grassland-orchards is very costly and is increasingly neglected or conveniently done with conventional machinery (lawn mower). In the first case, this special cultural landscape becomes overgrown, which leads to a decrease in the diverse composition of flora and fauna. In the second case, often species-poor ornamental lawns are created and small creatures (insects, amphibians, reptiles) are killed. Grazing by sheep or goats maintains the orchard meadows in a natural and gentle way. Sheep grazing, which was widespread in the region until the middle of the 20th century, is no longer economical today on the relatively small plot sizes (not every meadow owner wants to have sheep or goats roaming over their property these days).

Therefore, with this project I would like to help small scale livestock owners who are interested in sheep or goat keeping to reduce the initial investment, provided they are willing to regularly graze the extensive grassland-orchards of interested meadow owners.

Transparency is very important to me. Especially since I myself was surprised about the required initial investment for the equipment when I searched for the individual items. For this reason I can make a very detailed listing. Overall, the money will be used to purchase the necessary equipment such as mobile shelter, watering trough, electric mobile fence, tree protection, etc. The values mentioned here also include a few Euros each for the EcoCrowd fees and the reward goods.

For the mobile shelter, I have already submitted an application for funding to the Swabian Alb UNESCO Biosphere Reserve. If this application is approved, I can receive about 500 EUR in support through it. However, this application will probably not be decided until May 2021. Should I reach the project goal in the meantime with this crowdfunding campaign and receive a positive decision, I will also use the 500€ for the project, e.g. for possible veterinary costs, registration of the animals at the veterinary office or similar.

I will provide the entire equipment to animal owners free of charge, so that they can let their animals graze on my own meadow (approx. 2 – 4 weeks per year), as well as on other meadows that do not belong to me.

The project serves to preserve a species-rich, centuries-old cultural landscape that forms the largest contiguous extensive grassland-orchard area in Europe: It is a habitat for more than 5,000 animal and plant species that require the regular care of the meadow orchards.

Gentle grazing of the meadows preserves the diversity of typical meadow plants, which serve as a habitat for a variety of animals (insects, birds, reptiles, amphibians, small mammals etc.). In addition, since the grazing is to be done free of charge or for a voluntary donation, the acceptance of the meadows by the population increases. So far, I have already been able to inspire five other extensive grassland-orchards owners for my idea. On one of the meadows there is even a barn, which is available as winter quarters for the animals!

In addition, the sheep or goat keeping on changing pastures corresponds to the natural behavior of these farm animals, which can then be kept appropriate to their needs. Since my idea is based on the keeping of only a small, non-commercial herd, the animals are also not under any economic pressure.

I also have already contacted schools, kindergartens and therapy facilities in the region, which can be gladly involved in the care and keeping of the animals and which showed serious interest.

For the mobile shelter, the use of recycled and leftover materials from the surrounding area is planned (e.g. old boards, etc.) and it is to be built in the course of a vacation program with children.

In one of the villages in the project area, it is also possible to have the wool of the animals pressed into wool pellets, which can then be used as regionally produced fertilizer.

I’m the man behind the project: Tobias Metzger, who grew up in the project area, has been around the world a lot, returned to his old home after many years, and owns a small extensive grassland-orchard in the Swabian Alb UNESCO Biosphere Reserve. When I mow my meadow with a beam mower once or twice a year, it is very exhausting on the one hand, and on the other hand it is a pity for all the accumulating grass, which I rake into big piles and let rot. After many unsuccessful phone calls and emails in search of farmers who can use the grass for their cattle, sheep, goats or pigs and conversations with other meadow owners who have similar problems, I came up with the idea of this project. But also the search for hobby sheep or goat owners turned out to be difficult: unlike chickens, which can be kept in practically any garden, the effort for a small flock of sheep or goats is much larger.

Therefore I would like to lower the entrance hurdle into the breeding of these beautiful animals with this project. First talks are promising: I have found several nice people who are interested in keeping sheep and goats and some of whom have an agricultural background. So expertise is available. What is lacking is the initial liquidity – and that is what I want to take care of with this project here on EcoCrowd.

We graze for the future, because ...

we thereby preserve a centuries-old cultural landscape rich in species.